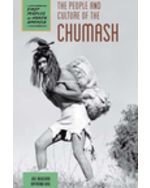 First Peoples of North America: The People and Culture of the Chumash, 1st Edition

For thousands of years, Native Americans have called North America home. They built great cities, communities, and cultures in the continent’s hills, valleys, deserts, and forests. However, for many, with the arrival of Europeans, traditional ways of life were challenged and sometimes eradicated entirely. As was the case with many Native tribes living on the West Coast, the Chumash were eventually influenced by the California missions and Catholic priests that populated the region from the 1700s onward. This is the story of how they persisted, despite hardship, and what life for Chumash members is like today.