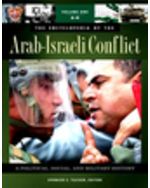 The Encyclopedia of the Arab-Israeli Conflict: A Political, Social, and Military History, 1st Edition

It is one of the world's bloodiest, longest running, and most intractable regional disputes. Yet during the last 60 years, despite intermittent progress toward peace, the struggle between Israel and its Arab neighbors has remained as frustrating and potentially devastating as it has ever been.

The Encyclopedia of the Arab-Israeli Conflict: A Political, Social, and Military History is the first comprehensive general reference encompassing all aspects of the contentious Arab-Israeli relationship from biblical times to the present, with an emphasis on the era beginning with World War I.

The Encyclopedia of the Arab-Israeli Conflict goes beyond simply recapping military engagements. In four volumes, with more than 750 alphabetically organized entries, plus a separate documents volume, it provides a wide-ranging introduction to the distinct yet inextricably linked Arab and Israeli worlds and worldviews, exploring all aspects of the conflict. The objective analysis will help readers understand the dramatic events that have impacted the entire world, from the founding of modern Israel to the building of the Suez Canal; from the Six-Day War to the Camp David Accords; from the assassinations of Anwar Sadat and Yitzhak Rabin to the rise and fall of Yasser Arafat, the 2006 Palestinian elections, and the Israeli-Hezbollah War in Lebanon.