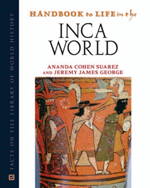 Although it only lasted a few centuries, the Inca Empire quickly became one of the world's most famous pre-Columbian centers of power. HANDBOOK TO LIFE IN THE INCA WORLD is a comprehensive and accessible examination of the Inca Empire, which stretched across the Andes Mountains in Peru from the 13th century until the invasion of the Spanish in the 16th century. Drawing on archaeology, anthropology, art history, ethnography, and 16th-century Spanish chronicles, this handbook offers a readable, informative, and easy-to-navigate format that explains how the Inca Empire became such an influential.