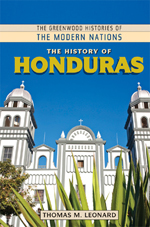 Honduras has suffered both political trauma and natural disasters throughout its history. In 1969, Honduras' political tensions with El Salvador during a soccer series preliminary to the World Cup led to the four-day-long "Football War." In 1998, Hurricane Mitch caused billions of dollars of damage to Honduras; ten years later, half of the country's roadways were ruined, often beyond repair, by substantial flooding. Most recently, many countries have frowned upon the Honduran government's shift of power from the president to the head of Congress.

Front Cover.
Half Title Page.
Advisory Board.
Title Page.
Copyright Page.
Dedication.
Contents.
Series Foreword.
Preface.
Acknowledgments.
List of Acronyms.
Timeline of Historical Events.
1: Introduction: Understanding Honduras.
2: Indians, Spaniards, and Independence.
3: Conservatives and Liberals.
4: The World Comes to Honduras.
5: The Banana Republic or An American Colony: 1900-1933.
6: The Era of Tiburcio Carias: 1932-1954.
7: The Cold War Comes to Honduras.
8: Honduras Today: The More Things Change, the More they Stay the Same.
Notable People in the History of Honduras.
Bibliographic Essay.
Index.
Other Titles in the Greenwood Histories of the Modern Nations.