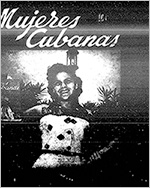 This collection is a study on feminists and the feminist movement in Cuba, from the time of Cuban independence to the end of the Batista regime. It provides a documentary explanation of how a small group of women and men helped to shape broad legal reforms and describes their campaigns, the version of feminism they adopted with all its contradictions, and contrasts it to the model of American feminism.

The documents in this collection, most of which are in Spanish, fall into three categories:

The first category contains memoirs of feminist congresses, collections of essays by feminists, journals published by feminist organizations, and published speeches and radio broadcasts. Among the publications are Aspiraciones (1918), an early feminist journal published by the Partido Feminista Aspiraciones; La Mujer Moderno (1926), the journal for the Club Femenino de Cuba, the oldest Cuban feminist organization; and La Mujer (1929-1931), the journal of the Partido DemÃ³crata Sufragista, focusing on the entire Cuban feminist movement.

The second category consists of assessments by politicians, jurists, and legislators about the condition of women in the cities and countryside. These materials provide an in-depth view of the ruling elite's perception on the reform of laws to improve the status of women.

The third category contains excerpts from novels, essays and poetry written by women about women. Also included are literary anthologies of Cuban women writers in general as well as literary analysis of these women's works.

This collection of unique and difficult to acquire materials, lends itself to a study of Cuban women in politics, Cuban feminism, Cuban women's literature and the legal status of women from 1898 through 1958.