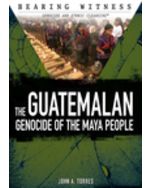 The Maya Empire became a thriving civilization between the third century and the seventh century CE, but by 900 CE war, drought, and disease wiped out most of its cities and the Mayan people were greatly reduced. Unfortunately, the greatest threat to their existence was yet to come, when the Guatemalan genocide would decimate those who remained in the 1970s and '80s. The facts of the Mayans' story will be intertwined with profiles of individuals and in-depth looks at related topics. Readers will learn how to help those faced with genocide and understand a history that could otherwise repeat itself.

Front Cover.
Title Page.
Copyright Page.
Contents.
1: Introduction.
2: The Rise of the Mayan Empire.
3: The Start of the Decline.
4: The Drought and the Famine.
5: Modern-Day Genocide.
6: Legacy.
7: Timeline.
Glossary.
For More Information.
For Further Reading.
Bibliography.
Index.
About the Author.
Photo Credits.