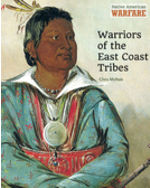 Perhaps no period of Native American warfare is as familiar as the Powhatan tribe's fight against British settlers in the early seventeenth century. The stories of Pocahontas, John Rolfe, and Chief Powhatan have been told and retold since that time. However, there are many more key figures from East Coast tribes, including the Cherokee, Seminole, and Creek, who shaped history through battle. This book highlights major conflicts and the warriors who fought to preserve their way of life.