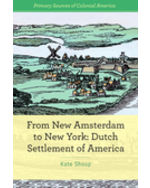 The Netherlands was a world economic power in the seventeenth century. It sought to expand its influence by establishing a colony in the New World. New Amsterdam, situated between Plymouth and Jamestown, was successfully settled in 1624. Readers learn about the rapid rise and fall of this colony, which would be taken over by the British and renamed New York.