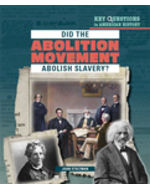 Readers will explore an essential topic through this book. In the United States, slavery was an important institution for many farmers, especially in the southern states. However, many people fought against slavery as a legal practice. One of the causes of the Civil War was slavery and, in 1863, President Abraham Lincoln issued the Emancipation Proclamation, freeing slaves in the states that rebelled against the Union. Although slaves were officially free, many practices such as sharecropping were instituted in some southern states, effectively preventing former slaves from improving their lives. The abolition movement successfully freed slaves, but former slaves had a long way to go before they were truly free.