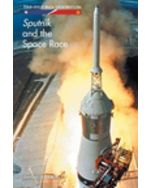 In the late 1950s, space became the new source of conflict for the United States and the Soviet Union. The world changed in 1957 when the Soviet Union launched Sputnik. The world's first satellite, Sputnik prompted advances in science and technology. Each side was determined to demonstrate technological acumen and military prowess through the ultimate space race. This book explores how technological power was used in the fight for political dominance.

Front Cover.
Title Page.
Copyright Page.
Contents.
Introduction: On Your Mark, Get Set….
1: Mounting Tensions.
2: The Space Race.
3: The Faces of the Cold War.
4: Negotiation and Innovation.
5: The Legacy of the Space Race.
Chronology.
Glossary.
Bibliography.
Further Information.
Index.
About the Author.