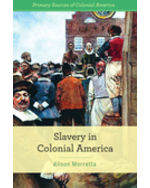 Slaves replaced indentured servants as a source of cheap labor in all of the colonies early in the seventeenth century. Slavery was first legalized in Massachusetts. However, economics soon made slavery unnecessary in the North while increasing demand for it in the South. Readers learn from those who lived it, how this increased demand led to the importation of African slaves into the colonies and the expansion of an institution that would threaten to tear a new nation apart.