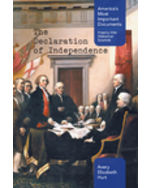 The Declaration of Independence is one of the most beloved of America's founding documents. This book offers a refreshing take on the history surrounding it. In addition to examining the circumstances and personalities that led to the drafting of the document, this book takes a close look at the wording and philosophy of the document itself, demonstrating how those ideas have defined our nation since. Readers will be surprised to learn that Thomas Jefferson initially included a passage calling for the abolition of slavery, and that the declaration provided much support for the U.S. suffrage and abolition movements that came later.

Front Cover.
Title Page.
Copyright Page.
Contents.
1: The Slow March toward Revolution.
2: A Radical Announcement.
3: Striving to Live up to the Promise.
Glossary.
Further Information.
Bibliography.
Index.
About the Author.