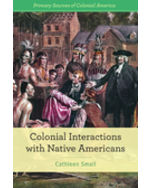 European settlements in the colonies would never have survived without help from Native American tribes. As the European population grew, so did conflicts with the indigenous people who were being taxed, attacked, and pushed out by the newcomers. Readers hear from both sides in a relationship that rapidly went from good to bad.