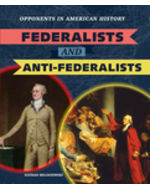 The differences between the Federalists and Antifederalists revolved around the ratification of the U.S. Constitution. It was an argument that started in the late 1780s and in some ways, it's a debate that's still being had today; the power of the federal government versus states' rights, the interpretation of individual liberties, and urban versus rural areas. This book examines the issues from both sides, profiles the key Founding Fathers who were involved, and discusses the impact of the Antifederalists' most important victory, forcing the Constitutional Convention to adopt a bill of rights. Readers will learn how the disagreement between the Federalists and Antifederalists caused the creation of the first 10 Amendments to the Constitution, which protect U.S. citizens' freedoms to this day.