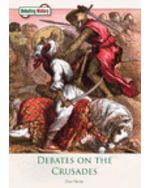 The eleventh- and twelfth-century attacks by European Christian armies on Muslims in the so-called Holy Land in what is now Israel and Palestine has long fascinated people worldwide. Through a narrative-driven pro/con format—supported by relevant facts, quotes, and anecdotes—this book examines controversial issues stemming from historic events. Topics include: Was the First Crusade a Justified Defensive War? Did the Crusaders Commit Atrocities in the name of God? Were the Crusades More Brutal than Other Medieval Wars? Is Seeking Revenge for the Crusades an Inspiration for Modern Islamic Jihad?

Front Cover.
Copyright Page.
Contents.
Foreword.
Important Events of the Crusades.
1: A Brief History of the Crusades.
2: Was Retaking the Holy Land the Purpose of the First Crusade?.
3: Did the Crusaders Commit Atrocities?.
4: Were the Crusades More Brutal than Other Medieval Wars?.
5: Is Seeking Revenge for the Crusades an Inspiration for Modern Islamists?.
Source Notes.
For Further Research.
Index.
Picture Credits.
About the Author.