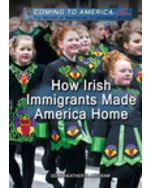 Coming to America: The History of Immigration to the United States: How Irish Immigrants Made America Home, 1st Edition

Written by a descendent of Irish immigrants, this book tells the tale of how Irish-born immigrants functioned as the largest immigrant group during the first two hundred years of the British Colonies. Readers will discover how they forged frontier societies and expanded the geographic boundaries of colonial settlements. Irish Americans served at all levels in U.S. government, including twenty-two presidents, and they contributed to canals, roads, and railroads during the nineteenth century. This volume will divulge how Irish immigrants suffered severe prejudice and lost much of their original culture and language, though their eventual assimilation provided a blueprint for the acceptance of other immigrant groups.