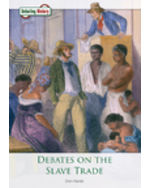 For three centuries Britain, the United States, and other Western nations carried on a massive, brutal trade in black slaves captured in Africa. Eventually Britain led the way in ending that despicable enterprise. Through a narrative-driven pro/con format—supported by relevant facts, quotes, and anecdotes—this book examines controversial issues from the point of view of someone who lived during the period. Topics include: Is Slavery Immoral? Is Slavery Essential to the Economies of the Southern States? Should Slavery Be Abolished? Should the Descendants of Slaves Receive Reparations?

Front Cover.
Copyright Page.
Contents.
Foreword.
Important Events of the Slave Trade.
1: A Brief History of the Slave Trade.
2: Is Slavery Immoral?.
3: Is Slavery Essential to the Economies of the Southern States?.
4: Should Slavery Be Abolished?.
5: Should the Descendants of Slaves Receive Reparations?.
Source Notes.
For Further Research.
Index.
Picture Credits.
About the Author.