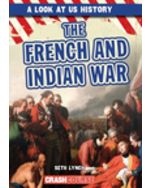 A Look at US History: The French and Indian War, 1st Edition

The French and Indian War was just one part of a global conflict between France and Great Britain and their allies. However, for U.S. citizens, it marked the beginning of the revolutionary era. As one of the causes of the American Revolution, the French and Indian War is a staple of social studies curriculums. In this volume, its complexities are pared down to the most important facts to give struggling readers a better chance to understand them. A concluding timeline provides all readers a way to review the major points of this history-making war.<\P>