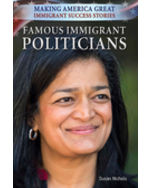 The U.S. Constitution was signed by 39 men, all of whom we consider the "founding fathers" of the nation. But did you know that seven of those 39 were immigrants to the United States? Immigrants have served as politicians in the United States since the country's founding, in all branches and all levels of government. Readers learn about the contributions of immigrants who served as senators, congressional representatives, mayors, and governors, such as Henry Kissinger, Arnold Schwarzenegger, Pramila Jayapal, Mazie Hirono, and Tammy Duckworth.