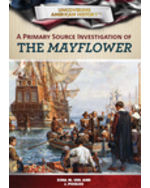 The Pilgrims braved stormy seas on the Mayflower to make a life in a new land, America. Primary sources help teach the truth about the difficulties that drove them to a promised land to practice their religion freely. Though peril plagued the ship's voyage, the danger on land from disease and starvation was just as great. Without the assistance of American Indians, the colonists would have perished that first year. Instead they survived to leave behind the Thanksgiving tradition for future generations. Readers delve into the dramatic tale of a band of stalwart Pilgrims in this compelling, vividly illustrated narrative.