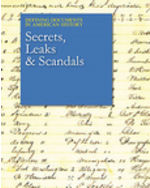 This title offers in-depth analysis of speeches, memos, letters, reports, transcripts, minutes, and testimony related to some of the nation's most notorious scandals. The set begins with the letters of the nation's most infamous traitor and continues through the 2018 executive order that resulted in the separation of families at the U.S./Mexico border. Material is organized under six groups: Secrets, Conspiracies, and Scandals through the 19th Century ; Controversies, Conflicts, and Communism through the mid-20th Century; Government in Hiding, from Vietnam to Watergate and After; Scandals, Scares, and Intelligence Failures in Recent Decades; Lies, Leaks, and Hacks in the Contemporary Period; and Selected Environmental Debacles. Designed for high school and college students, the aim of the series is to advance the study of primary source historical documents as an important avenue to understanding the past and its relationship to the challenges we face today.