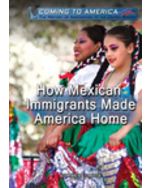 Coming to America: The History of Immigration to the United States: How Mexican Immigrants Made America Home, 1st Edition

As the demographics of the United States shift, Mexican American issues and values are gaining traction. Written by someone whose family immigrated to the United States after leaving Mexico, this book explores the generations of Mexican immigrants and their American descendants who struggled for civil rights, whose lands have been colonized, and who have been the backbone of American industry and agriculture since the nineteenth century. This book exposes a fickle culture surrounding work relations in a country that treated Mexican Americans not only like disposable labor, but also like non-citizens or nonpersons, even with the Mexican government's complicity.