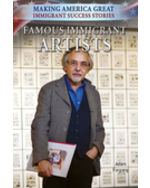 The United States has often been described as a melting pot, and many people who have immigrated to the U.S. from other countries in search of the American dream have contributed not just their cultural histories and traditions, but their artistic spirit as well. This book covers important immigrant artists such as the naturalist painter John James Audubon, Superman co-creator Joe Shuster, multimedia artist Yoko Ono, cartoonist Art Spiegelman, and the street artist Thierry Guetta (Mr. Brainwash). Immigrant artists have collectively helped to make America great through their tremendous impact on the visual arts.