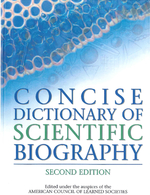 This is the first new edition of the acclaimed Dartmouth Medal--winning Dictionary since 1981. It integrates the 5,100 biographies from the base set with the 400 biographies found in the Supplement, and includes photos and portraits of the most-studied scientists. Most important, the Concise Dictionary Of Scientific Biography is comprehensively indexed by theme and subject for the first time, making it a true historical resource, and more than a compendium of biographies.

"A ready reference to more than 5,400 scientists from all eras of history and all parts of the world. The two indexes to this volume, 'scientists by nationality' and 'scientists by field,' will be helpful to students conducting research or preparing reports in both science and social studies. Entries include the place and dates of birth, areas of research, major parts of careers and outstanding achievements. The language of each entry is, by necessity, full of scientific terms that might need interpretation for the middle and high school student with only a general science background. Black-and-white sketches and drawings appear on some of the pages. Recommended because of its broad coverage."-- GaleGroup.com's Reference For Students (Blanche Woolls and David Loertscher) February 2001

"This is a book based on the multivolume Dictionary of Scientific Biography first published in 1981...The biographies here are short, one to only a few paragraphs, giving a general understanding of the importance of the scientist's achievements and contributions. This book would be useful as a quick introduction and a starting point for further study. The set covers only the most famous of scientists so it lacks in completeness of coverage. Yet, it does cover scientists that most people will ask questions about. This dictionary is a valuable purchase for any library because it gives a short explanation and biography or scientists and their gifts to society." -- ARBA (American Reference Books Annual) 2001

"The best English-language collective biography for deceased people who have made important contributions in the natural sciences and medicine is Dictionary of Scientific Biography (1970-80, reprinted 1981- ), sponsored by the American Council of Learned Societies. The set, which contains articles and bibliographies concerning more than 4,500 scientists who died before 1981, currently consists of 16 volumes and two supplements. The cost of the set has prevented many libraries from acquiring it. To meet the needs of those libraries, two concise, one-volume editions have been published to act as handy guides to the larger set, this second edition of which updates the first (CH, Jan'82). Although it lists everyone from the parent set, the length of each entry runs about ten percent as long as the original, and the personal bibliographies have been dropped. The biggest bonuses, however, are its lists of scientists by nationality and by field and its extensive index of persons and subjects. Although numerous special biographical dictionaries of scientists are in print, this volume will meet the broadest requirements for this information." -- CHOICE (April 2001)

"...this edition catalogs more than 5,400 people,..who died before 1981...easier to read...Consider adding this title to your collection if you don't have the previous edition or other scientific biographical resources. Additional selection." -- The Book Report (May/June 2001)