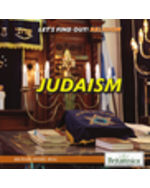 As one of the world's oldest still practiced religions, Judaism has an illustrious history of fascinating, yet often misunderstood, beliefs and practices. Though it has only fourteen million followers today, Judaism is the basis of the Abrahamic religions, and as such influenced the core teachings of Christianity and Islam. The beautiful, colorful spreads in this elementary-level text offer readers a clear, yet thorough survey of Judaism's history, practices, and teachings. The significance of Rosh Hashana, Passover, and other Jewish festivals is covered, as well as cultural movements such as Zionism. Readers will also learn of atrocities carried out against the Jewish people, including the Holocaust, and learn about episodes of Anti-Semitism.