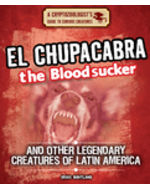 A Cryptozoologist’s Guide to Curious Creatures: El Chupacabra the Bloodsucker and Other Legendary Creatures of Latin America, 1st Edition

Like any other place where people live in the world, Latin America has its fair share of legendary tales. El Chupacabra, a creature reported to drink the blood of livestock, is just one example of the type of beast believed by some to exist in this part of the globe. Readers of this high-interest volume will learn that others include a giant worm said to burrow in the giant trenches it digs and a giant anaconda some claim to be much bigger than the truly large snakes that exist nearby. Eye-catching images supplement this already engaging text and make for an exciting read.<\P>