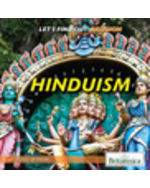 Dating back over three thousand years, Hinduism is a rich religion with more than nine hundred million practitioners worldwide. Unlike most world religions, Hinduism has no single founder or religious text. Instead, Hindus revere a body of texts known as the Veda and share sets of practices and beliefs including nonviolence, reincarnation, and the holidays of Diwali and Holi. Central tenets of Hinduism are covered in this photograph-filled, elementary-level text. Readers will enjoy learning about the history of Hinduism, important deities, and Hinduism's influence on society at large.