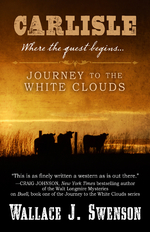 Dirt-poor farmer, Paul Steele, is tested in Nebraska of the 1850's. He and his wife meet adversity head-on and overcome it while teaching their children honesty, loyalty and dedication. As the adults begin to overcome their challenges, the story centers more around their eldest son Simon's friendship with his best friend, Buell. Though these boys have dramatically different personalities, their loyalty to each other is unwavering, and each one takes something different from the lessons they share equally. Simon lives by the rules only to see his honesty turned against him, and the townspeople drive him and his friend away. Carlisle does not simply tell you about life on the Western frontier, it takes you there.