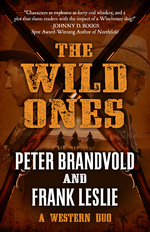 When Sheriff Ben Stillman's deputy and best friend, Leon McMannigle, shoots a young woman who was about to shoot Stillman, the deputy's explanation falls on deaf ears. The dead girl's father sends his wild sons out on the vengeance trail. Wounded, Leon McMannigle is outnumbered and on the run. But Sheriff Ben Stillman takes the hunting of his friends as an act of all-out war.

When the drifting half-breed, Yakima Henry, stops in the little town of Horsetooth for a drink to cut the trail dust, he ends up killing a saloon owner and bedding the dead man's beautiful wife. Soon he and the woman are on a bloody trail, looking for hidden treasure in Old Mexico . . . along with a mob of cutthroat desperadoes.