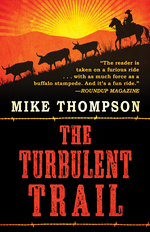 Former soldier and Army sharpshooter turned brawler and drunk. Charlie Deegan winds up in Yuma Territorial Prison. Knowing he can't last the remaining nine years of his sentence, he escapes determined to change his life. Charlie heads north hoping to become a cowboy. Beaten down by the harsh Sonora Desert, he discovers a mummified miner whose hoard of supplies gives Charlie a new chance at life. He befriends a cowboy, Creed McCall, who agrees to help him get a job on a north bound cattle drive. Untested as a cowboy, Charlie must start as the cook's helper. As the herd heads out on the long trail drive, will he be able to prove that he has what it takes to become a real cowboy?