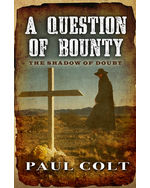 A Question of Bounty: The Shadow of Doubt, 1st Edition

A Question of Bounty: The Shadow of Doubt examines the 130-year-old controversy over Sheriff Pat Garrett’s claim that he killed Billy the Kid on July 14‚ 1881. John Poe‚ Garrett’s deputy on the scene that night‚ and others question Garrett’s claim. They suggest he killed the wrong man and covered it up. The controversy persists because there are contradictions‚ irregularities and unanswered questions about those events that simply won’t go away. A Question of Bounty: The Shadow of Doubt follows Billy the Kid’s outlaw adventures and unlikely young love affair to John Poe’s version of that fateful encounter with Sheriff Pat Garrett. The story concludes with the life of a mysterious stranger that begins three weeks after the Kid’s reported death.