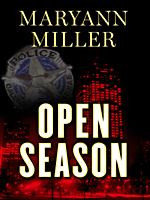 Amid racial tensions and the deadly force controversy sweeping the city of Dallas‚ Homicide detectives Sarah Kingsly and Angel Johnson are unlikely and unwilling partners. They both see the pairing as better PR than policy.

Their first case‚ dubbed the Mall Murders‚ begins with the death of a maintenance worker at one of the Metroplex shopping malls. A security guard is then killed at another mall. The final murder victim is a young window dresser whose body is left like a mannequin behind the glass of an exclusive boutique at the Galleria Mall.

Five Star Mysteries are standard print, first editions from award-winning authors as well as up-and-coming authors of the Mystery genre. These hardcover first editions will consist of new novels and short story collections plus novels that have been restored from original typescripts. The Five Star First Edition Mystery Series titles are carefully selected to appeal to a broad range of genre fans and include all subgenres of mystery: romantic suspense, traditional mysteries, private eye novels, cozies, hard-boiled detectives, and short story collections. The mystery genre continues to boom and this plan speaks directly to what today's readers want -- a mix of original novels and short fiction collections from established, award-winning professionals as well as up-and-coming writers in the field. Previous authors have included Ralph McInerny, Catherine Dain, Les Roberts, Jeremiah Healy, and more. New, as of June 2004, four (4) titles shipped approximately every four weeks. Actual covers may be different from those shown.

"Miller (One Small Victory) spins a tight tale that's a cut above the average police procedural in this first of a new series introducing Dallas police detective Sarah Kingsly.  Readers will want to see more of these engaging female cops." --Publishers Weekly, October 2010

"Try this debut mystery by a journalist for its open treatment of current urban problems, clean prose, and realistic depiction of women working together. For readers who enjoy Robin Burcell and fans of police procedurals." -- Library Journal, December 2010