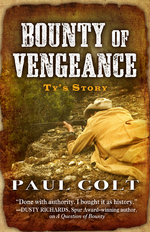 Bounty of Vengeance is the second book in Paul Colt's Bounty Series. Former Cheyenne Sheriff Ty Ledger and bounty hunter Johnny Roth pursue a half-breed serial killer responsible for the death of Ledger's wife and unborn child. The bloody trail leads to Lincoln County New Mexico and a town girding for war. The killer leads Ledger and Roth to an encounter with renegade Comanche that has the pair counting their bullets, making sure each has one left to assure his final escape. Told in a gritty style reminiscent of Robert B. Parker, Colt transports the reader to events that test the mettle of men and the hearts of the women they love.

"Like the first book in the Bounty Series, 2014's A Question of Bounty, this one cleverly and seamlessly mixes fact and fiction, telling a small, personal story set against a larger historical backdrop. Ledger and Roth make a good literary team, two men who are both very similar and very different, both driven to risk their own lives to bring justice (or perhaps revenge?) to a killer. Great stuff for fans of traditional westerns."