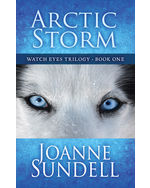 Call of the Wild meets Brother Bear in this epic tale of adventure‚ endurance‚ and young love — a heroic journey tested against America’s last frontier.

This story begins in 1908 when the gentle Chukchi sled dog is traded away from its native home in Siberia and set on a perilous course across the Bering Sea for the gold-rich territory of Alaska‚ landing them in a fight for survival they didn’t start.

Thirteen-year-old Anya is a Chukchi shaman‚ a medium able to pass between the spirit world and the human world. She will do anything to protect her dogs. Forced onto a deadly journey to save them‚ a chance meeting with sixteen-year-old seafarer‚ Rune Johansson‚ puts him on the same path as her own. Both have to make a stand against enemies hiding in shadow‚ waiting to strike.

The ice storm is coming.