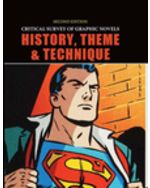 This book contains essays covering the wide range of themes and concepts in graphic novels, and includes genres, time periods, foreign language traditions, social relevance, and craftsmanship. It provides insight into various specific aspects of the development of graphic novels, such as storytelling, lettering, inking, and illustration styles, and covers production and distribution of graphic novels and the significance and history of comic book conventions. The book’s diverse, varied content also covers issues on readership and literacy, library collection development, and censorship. New articles include: Digital comics; Female graphic novelists; Graphic novel creators coming from other fields; Comics scholarship; Comic conventions and festivals; Changing representation of women in comics; and Comics to audio books; comics to film. This new edition provides an understanding of the history of graphic novels alongside new information about themes and techniques used in the genre.<\P>