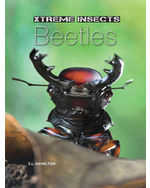 This title introduces readers to beetles. Different types of beetles are examined such as the titan, goliath, ironclad, Hercules, and blister beetles, as are fireflies and ladybugs. Pest beetles such as the emerald ash borer and weevils are also included. Readers will learn about each beetles' body including all the parts of its head, thorax, and abdomen. Where each beetle can be found is covered, as are which beetles you can eat! Aligned to Common Core Standards and correlated to state standards.