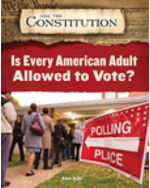 Ask the Constitution: Is Every American Adult Allowed to Vote?, 1st Edition

When the United States of America began as a country, only white men who owned land could vote. Over the last 230 years, people have fought and protested and even died to expand the right to vote to include every adult over the age of eighteen. Today, are there ways you can lose your right to vote? If it's too difficult to vote, can we really say that you still have that right? Voting is the best and sometimes only way Americans can have a say in their government, and readers will learn why it's worth fighting for.

Front Cover.
Title Page.
Copyright Page.
Contents.
Introduction.
1: Voting Rights at the Founding of the United States.
2: Voting Rights for (Almost) All Men.
3: Expanding the Vote.
4: What Is a Vote Worth When It Can’t Be Cast?.
5: Can Every Adult in America Vote?.
6: Chapter Notes.
Glossary.
7: Further Reading.
Index.