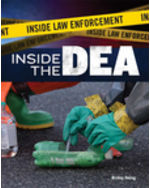 Inside Law Enforcement: Inside the DEA, 1st Edition

The Drug Enforcement Administration was created by President Richard Nixon in 1973 as a way to centralize drug control efforts. Since then, it has become a powerful agency that plays a part not just in enforcing drug laws, but in monitoring and targeting those who funnel drugs to the United States from overseas. Unfortunately, it has also been involved in significant controversies. This book looks at how this essential agency developed, the role it plays in law enforcement, and what the future might hold for it.