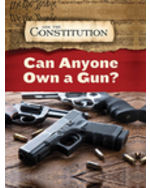 Ask the Constitution: Can Anyone Own a Gun?, 1st Edition

Since the birth of the United States of America, the question of who can own a gun has been debated by passionate people on both sides of the argument. The Founding Fathers are no longer around to clarify exactly what they meant in the Second Amendment. As the country suffers an increasing number of public shootings in schools and beyond, the question of who should be able to own a gun becomes even more important for the safety of everyone in America. Readers will explore the issue and make an intelligent decision for themselves.