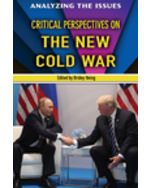 In 2017, Donald Trump ascended to the highest political position in the United States amid cries that Russia had meddled in the presidential elections. Evidence that Russian operatives had hacked the email accounts of various U.S. political organizations only caused these cries to grow louder. As the relationship between the United States and Russia, along with other big players, such as China, has deteriorated, experts are stating that this constitutes a new Cold War. <\Q> In this text, political analysts, government officials, and advocates weigh in on the issue to allow readers to reach their own conclusions about these important political issues.<\P>