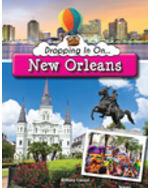 New Orleans, Louisiana, was founded by French Colonists in 1817. Because of its location, New Orleans played a large role in the antebellum slave trade, both in the importing of slaves and the growing of cotton and sugar crops using slave labor. During the Civil War (1861-1865), the city was captured by the Union Army. Learn all about the cultures, music, sports teams and everything else you need to know about this great city!