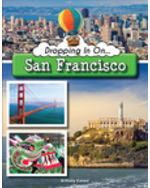 San Francisco, California, was first visited by Spanish settlers in 1769. The Spanish officially settled the area in 1776, and the city began growing into the major city it is today. Learn all about the cities landmarks, sport's teams and other facts that make this city one of the most popular U.S. cities.

Front Cover.
Title Page.
Before & After Reading Activities.
Table of Contents.
1: A Golden Start.
2: Shaking Up, Shaping Up.
3: A Melting Pot.
4: A Sports Giant.
5: The Fit City.
6: Where to Go, How to Get There.
Timeline.
Glossary.
Index.
Show What You Know.
Websites to Visit.
About the Author.
Copyright Page.