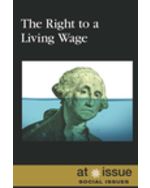 At Issue: The Right to a Living Wage, 1st Edition

With the disappearance of well-paying jobs and the increasing cost of living, it’s becoming more and more difficult to stay afloat in the United States. Workers who earn the minimum wage often can’t afford the most basic needs. In response, more than 100 U.S. cities have issued living wage ordinances, requiring payments that allow workers to afford food, clothing, shelter, utilities, and healthcare. It may seem obvious that everyone wins with a living wage. But does paying out a living wage help or harm the economy? Should corporations be forced to pay them? What is society’s responsibility to its workers?