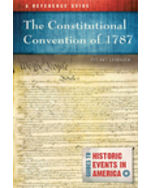 
The Constitutional Convention of 1787: A Reference Guide, 1st Edition

The Framers of the U.S. Constitution designed a novel republican form of government to replace the failing Confederation, one that would divide power between the federal government and the states, launching a new phase of the American experiment in representative democracy. Not until the end of the American Civil War, nearly a century later, would it become clear, as Abraham Lincoln put it in his Gettysburg Address, that government of the people, by the people, for the people shall not perish from the earth. This guide covers the background to the convention, the convention itself, the ratification of the Constitution, and the adoption of the Bill of Rights. The story of the convention is supplemented by a detailed chronology, primary source documents, biographical sketches of convention delegates, and a comprehensive bibliographical essay. Based largely on primary sources, the book also weighs in on some of the historiographical debates that have taken place among scholars.