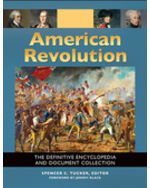 This authoritative, complete encyclopedia covers the American Revolutionary War (1775-1783) and the decades leading up to it, beginning with the French and Indian War, and the aftermath of the conflict, with emphasis on the early American Republic. Four volumes contain overview essays on the causes, course, and consequences of the American Revolution, with impeccably researched A-Z entries that address the full spectrum of political, social, and military matters that arose from the conflict, each cross-referenced with books for further reading. Volumes include a detailed bibliography, timeline, and glossary. A fifth volume contains primary sources, with insightful introductions that place documents in proper historical context, and aid understanding of the myriad motivations behind the American Revolution; the diplomatic, military, and political maneuvering that took place during the war; and landmark documents that shaped the founding and early development of the United States.