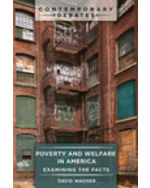 
Poverty and Welfare in America: Examining the Facts, 1st Edition

This title is intended to puncture rather than perpetuate myths that diminish our understanding of important policies and positions; to provide needed context for misleading statements and claims; and to confirm the factual accuracy of other assertions. The book clarifies some of the most contentious and misunderstood aspects of American poverty and the social welfare programs that have been crafted to combat it over the years. In addition to providing up-to-date data about the extent of American poverty among various demographic groups in the United States, it examines the chief causes of poverty in the 21st century, including divorce, disability, and educational shortfalls. Moreover, the book provides an evenhanded examination of the nation's social welfare agencies and the effectiveness of various social service programs managed by those agencies in addressing and reducing poverty.

Front Cover.
Half Title Page.
Other Frontmatter.
Title Page.
Copyright Page.
Contents.
How to Use This Book.
Introduction.
General Questions about Poverty.
1: Have Poverty Levels Risen in Recent Decades in the United States?.
2: What Is the “Poverty Rate” and Does It Measure Poverty?.
3: Is the Current Poverty Rate Accepted by All Experts?.
4: Is the Poverty Rate in the United States High When Compared to Other Countries?.
The Causes of Poverty.
5: The Causes of Poverty: Does Unemployment Create Poverty?.
6: Do Low Wages Cause Poverty?.
7: Does Discrimination in the Workplace (and Elsewhere) Cause Poverty?.
8: Does Lack of Education and Skills Cause or Exacerbate Poverty?.
9: Does a Lack of Benefits from the Government and Employers Cause or Exacerbate Poverty?.
10: Does the Higher Cost of Living and Inflation of the Last Nearly Half-Century Cause or Exacerbate Poverty?.
Who Are the Poor?.
11: Which Ethnic and Racial Groups Are Most in Poverty in the United States?.
12: Which Age Groups Are Poorest in America?.
13: Are Women Poorer Than Men in the United States?.
14: Does Family Structure Affect Poverty?.
15: Does Where You Live—Urban, Rural, Suburban—Affect the Poverty Rate?.
16: How Does Poverty Differ Regionally Across the United States?.
What Are “Welfare” and “Social Welfare”?.
17: When Did Types of “Welfare” Begin in the United States?.
18: Has Aid to the Poor Always Been Controversial?.
19: How Big a Part of the U.S. Budget Is Spent on Social Welfare?.
20: What Are the Monetary Amounts of Individual Benefits From Social Welfare?.
21: Do People on Social Benefits Work?.
22: How Long Are Most People on Social Benefits?.
Controversies over “Welfare”.
23: Do Poor People Have Different Social Norms and Culture than Other Classes in America?.
24: Do People Lose Their Incentive to Work Because of “Welfare”?.
25: Are People on Welfare “Trapped in Dependency”?.
26: Is “Welfare Fraud” a Major Problem in the Social Welfare System?.
27: Why Do Some People Argue That “Everyone Gets Welfare” in the United States?.
28: Should There Be a Guaranteed Annual Income (or a “Basic Income” Asit Is Sometimes Called) as Proposed by Some Experts and Entertained by Both Parties in 1969–1972?.
Homelessness (and Hunger) in the United States.
29: Was There Always Homelessness in America?.
30: What Led to A Surge in Homelessness in Recent Decades in America?.
31: What Are the Characteristics of the Homeless Population by Age, Race and Ethnicity, Gender, and Other Attributes?.
32: How Successful Have Government Entities, Service Workers, and Others Been in Assisting Homeless People?.
33: Is There Hunger in the United States? If So, How Many People Suffer from Hunger or Related Problems?.
Coda.
34: Can People Who Are Poor or Even Part of the Working Class Count on a Degree of Upward Mobility in Their Lives to Do Better Than Their Families?.
35: Is It True That America Hates Its Poor?.
Index.
About the Author.