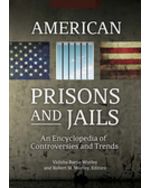 
American Prisons and Jails: An Encyclopedia of Controversies and Trends, 1st Edition

This encyclopedia provides a rigorous and comprehensive summary of correctional systems and practices and their evolution throughout US history. Topics include sentencing norms and contemporary developments; differences between local jails and prisons and regional, state, and federal systems; violent and nonviolent inmate populations; operations of state and federal prisons, including well-known prisons such as Alcatraz and Leavenworth; privately run, for-profit prisons and the companies that run them; inmate culture, including prisoner-generated social hierarchies, prisoner slang, gangs, drug use, and violence; prison trends and statistics, including racial, ethnic, age, gender, and educational breakdowns; the death penalty; and post-incarceration outcomes, including recidivism. Showcases contributions from leading scholars in the fields of correctional systems and practices and is a valuable resource for learning more about American prisons, jails, and community corrections.