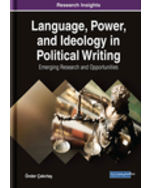 Politics and political literature studies have emerged as one of the most dynamic areas of scrutiny. Relying on ideological as well as socio-political theories, politics have contributed to cultural studies in many ways, especially within written texts such as literary works. As few critics have investigated the intersections of politics and literature, there is a tremendous need for material that does just this. This reference book focuses on the use of narrative and writing to communicate political ideologies, and explores literature spurring from politics, the disadvantages of political or highly ideological writing, writers’ awareness of the outside world during the composition process, and how they take advantage of political writing. Topics include gender politics, indigenous literature, and censorship. For academicians, librarians, researchers, and students of politics, international relations, cultural studies, women’s/gender studies, and political and ideological studies.

Front Cover.
Title Page.
Copyright Page.
Advances in Linguistics and Communication Studies (ALCS) Book Series.
Table of Contents.
Preface.
Acknowledgment.
1: Indigenous Australian Detective Fiction as Political Writing.
2: “Art Made Tongue-Tied by Authority”: Art, Power, and Ideology in Julian Barnes’s The Noise of Time.
3: A Representation of British Gendered Imperial Politics in Fiction for Children: Rudyard Kipling’s The Jungle Book.
4: Reflection of Ideology and Politics in Travel Writing: America and Russia in Each Other’s Mirror, 1930s-1940s.
5: Uprootedness, Resentment, and the Will to Power in Emily Brontë.
6: Negative Impact of Ideology in Albanian Literature.
7: Intertextuality in Political Discourse.
8: Narratives of Erasure: Caste in R. K. Narayan’s The English Teacher.
Related Readings.
About the Contributors.
Index.