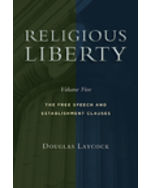 One of the most respected and influential scholars of religious liberty in our time, Douglas Laycock has argued many crucial religious liberty cases in the U.S. appellate courts and Supreme Court. His noteworthy scholarly and popular writings are being collected in four comprehensive volumes under the title Religious Liberty.

In this final volume, Laycock documents the use of the Constitu¬tion’s Free Speech Clause and Establishment Clause in legal briefs, scholarly and popular articles, House testimonies, and written debates. These two clauses have been vitally important in religious-liberty cases concerning religious speech in schools, politics, and the workplace, government funding of religious schools and social services, and the meaning of separation of church and state.