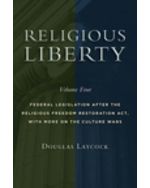 One of the most respected and influential scholars of religious liberty in our time, Douglas Laycock has argued many crucial religious liberty cases in the U.S. appellate courts and Supreme Court. His noteworthy scholarly and popular writings are being collected in four comprehensive volumes under the title Religious Liberty.

This volume presents a documentary history of the effort to replace the Religious Freedom Restoration Act with the Religious Liberty Protection Act, an effort that failed but led to narrower legislation protecting churches from hostile zoning and protecting the religious rights of prisoners. Documenting culture-war battles over religious liberty and abortion, contraception, and same-sex marriage, this volume includes journal articles, testimony to Congress, shorter popular writings, and letters to such political figures as Congressman Bobby Scott and President Barack Obama.